The journey of the Time Elves 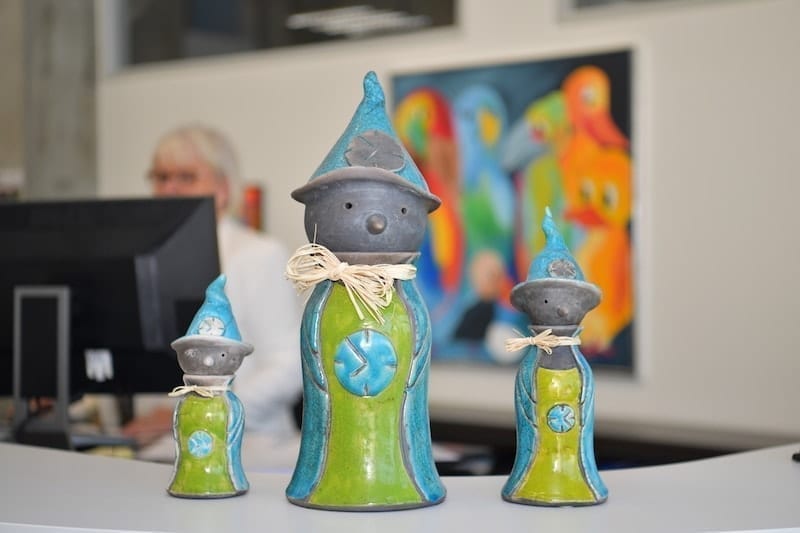 In collaboration with ceramic artist Lena Brammer Klokmose, TimePlan Software has developed the company’s mascot, ‘The Time Elf’. Since 2012, these mysterious figures in raku ceramics have travelled to clients’ offices as a work anniversary gift, to employees’ desks as a welcome present and to other friends of TimePlan.

Now, in the summer of 2020, the Time Elves have made their way into the TimePlan anniversary book “Respecting your time – 25 years with TimePlan.”

“Kis from TimePlan originally came across one of my elves at the Old Square in Aalborg. One day, she brought Henrik (Baasch, Founder and Chairman of TimePlan Software A/S) along to my workshop in Brønderslev and the elves touched something in both of them,” says Lena Brammer Klokmose, the ceramic artist behind the Time Elves.

“Kis had ideas about the colours and the clock face in the middle that create a familiarity and a connection to the TimePlan brand. I suggested that the clocks on the hat and the front of the Time Elves could vary to express that time passes and is ever-changing,” says Lena Brammer Klokmose.

Each Time Elf is numbered and a logbook is kept of when and where the Time Elves venture out. To date, 143 Time Elves have been sent packing from TimePlan Software’s office in Aalborg, Denmark since 2012.

“We wanted to create a special gift item, which was longer lasting than a bottle of wine. It needed to be of such quality and beauty that the beneficiary and the family would want to have the Time Elf on display,” says Kis Flindt, former CFO at TimePlan Software.

The Time Elf reminds the recipient that time must be spent wisely, and that it cannot be saved. Each Time Elf has a small card attached that explains the ideas behind its meaning.

“A lot of work, thought and effort has gone into creating the Time Elves. It has been an amazing project to be a part of with Kis and Henrik,” says Lena Brammer Klokmose, who continues to create more Time Elves for the TimePlan family as the others venture out.

Learn more about the journey of the Time Elves and other stories about TimePlan in our anniversary book “Respecting your time – 25 years with TimePlan.”

Attend the 25 years anniversary reception on 25 September 2020 at our head offices in Aalborg, Denmark. 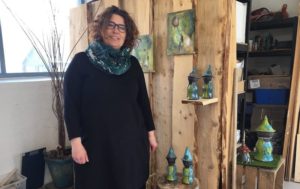 Lena Brammer Klokmose with the Time Elves at her workshop in Brønderslev, Denmark.